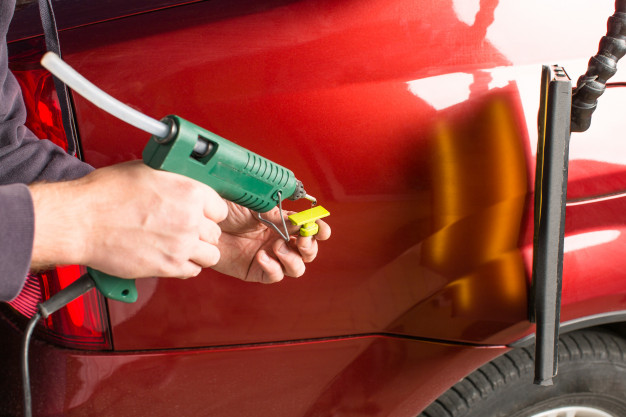 It’s only natural for your car to pick up minor dents and dings over the years. At times, it can happen from road debris or a minor fender-bender, swinging car doors in a jammed parking lot or a kid may bump into your car when bike-riding. Your car may get dented in many ways, but the important thing is that you seek car dent repair from an experienced technician. The most suitable, effective, and convenient dent repair method is PDR – Paintless Dent Repair.

When your car is dented, you may get worried when you think of all the expensive repair work needed. But that’s because you are thinking of the traditional dent repair process that involves stripping, sanding, and repainting. However, with paintless dent repair, your car dents will be restored using special dent repair tools. If the dents haven’t disturbed your car’s original paint, a PDR technician will massage the metal panels back to their original position. There is no sanding, repainting, or replacing body panels when paintless dent repair is applied. As a result, the factory finish of your car is untouched. After PDR, there will be no signs of dent repair because PDR delivers near-perfect results.

Because there are fewer repair processes and materials involved in paintless dent removal, labor and material costs are lower. When you bring your vehicle to a PDR business for dent repair, the technician will determine the cause of the dents and if PDR is a viable option for repairing them. This takes only a few minutes, after which a paintless dent repair expert will begin the work. The PDR specialist will not use any chemicals or paints, instead of relying on specialized reusable equipment to keep the entire repair costs low.

What influences the cost of PDR?

Serious dents on difficult-to-reach car parts will take more time and effort to fix, and the cost of restoration will be greater. It takes less time and effort to repair minor dents and dings on the conveniently accessible panels. As a result, the repair costs are cheaper. In general, major dent repair and minor car dent repair are less expensive than traditional dent repair techniques.

Additionally, most auto insurance companies recommend PDR as the ideal dent repair technique. This is because paintless dent repair is less costly, and it’s also fast. The quick repair time eliminates the need for insurance to send a courtesy car. Most importantly, it protects the value of the vehicle at a cheaper repair cost. From an insurance perspective, paintless dent removal is good for business.

Your vehicle’s body panels will need to be painted once the dents are filled using standard auto dent repair techniques. Solvents including enamel, urethane, and lacquer are used in automotive paint.

These solvents include unstable organic molecules, which are dangerous to humans and the environment. Paintless dent removal, on the other hand, does not require repainting. As a result, no harmful solvents or chemicals are used. PDR is the most eco-friendly dent repair technology today, with companies all around the world seeking ways to save the environment.

When done properly and methodically, PDR can take up to two hours or less to complete. There’s no need for surface preparation and paint drying, as is the case with time-consuming conventional dent repair techniques. As long as your car dents can be repaired through PDR, you won’t wait for long to get the dents repaired. In most cases, when your car has minor dents and dings, the dents can be repaired in under an hour. It takes less time to deliver flawless results, making paintless dent repair the ideal dent-removal technique for most car owners.

Paintless dent repair outweighs the traditional dent repair techniques in all aspects. PDR is more effective, saves time and money, is eco-friendly, and doesn’t disturb your vehicle’s factory finish. You should trust the top PDR technicians with repairing your car so contact us at Ted’s Dent Work California today for your dent repair needs!

What Can Paintless Dent Repair Fix?

THE FACTS ON PAINTLESS DENT Repair