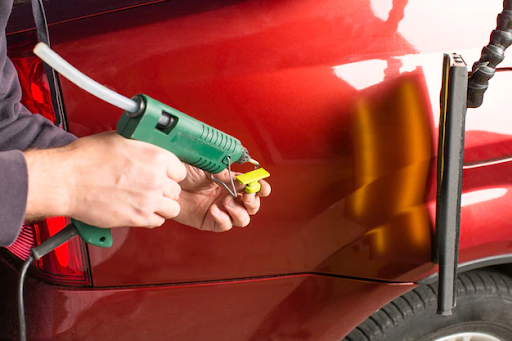 Even if you’re a cautious driver, your car may end up with a dent at some point. Dents can occur in various ways when you’re least expecting them.

Here are some of the most common causes of car dents:

Dents create an unsightly mark on your car, among other issues, so you should have them repaired as soon as possible after they occur.

This article will give you five valuable reasons why you shouldn’t postpone car dent repairs.

Repairing dents as soon as they occur is cheaper than waiting until the damage is extensive.

A dent may become large and uglier if left unrepaired for a long time, costing you more than it initially cost.

A dent may appear harmless to your vehicle and not urgent. However, the dented area will have an uneven surface, and the internal damage could be more than just the visible dent.

When shopping for second-hand cars, buyers keenly observe the car’s outward appearance. A dent-free car has aesthetic value and inspires the buyer to make an offer.

On the other hand, a dent/dents may portray you as a neglective owner, giving the buyer room to doubt the car’s overall condition. This will lower the car’s buying price and reduce your bargaining power.

Minor dents without paint damage can make your car appear older than it is, causing it to undersell. However, you can engage a professional paintless dent removal company to help you restore your car to its original state and increase its resale value.

When dents occur, non-visible cracks form on the area’s paint. If the dent is not fixed, wear and tear weather changes, and car washing will enlarge the cracks leading to the deterioration.

After the delay, you’ll incur the costs of repairing the dent as well as a new coat of paint.

But if the dent had been fixed early, you wouldn’t need to worry about repainting.

When paint cracks on a dented area are not repaired, peeling will begin, exposing the sealant.

Severe dents may have damaged the sealant, and the peeling exposes the structure metal to the elements, causing rust.

Rust is expensive to repair, so you should get dents repaired promptly to avoid a more extensive issue.

Car dents can mask structural damage underneath. For example, a dent on the fender or quarter panel can conceal a bent, underlying metal. This hidden damage could cause the front or rear instability and lead to an accident.

Car dents can make your car unsightly, reduce its resale value, damage the car paint, and make it prone to rust. When car dents are left unfixed for long, they may cause complicated problems later that are much more costly to repair. It is best to get the dents corrected as soon as they occur.

Paintless dent removal is the most cost-effective and time-saving technique to fix dents and hail damage.

This method requires highly skilled and experienced technicians for a perfect job, and they can fix your car’s dents at your convenience.

Paintless dent removal is the most cost-effective and time-saving technique to fix dents and hail damage.

This method requires highly skilled and experienced technicians for a perfect job, and they can fix your car’s dents at your convenience.

What is Paintless Dent Removal And Why Do You Need It?

What are the techniques for Paintless Dent Removal?