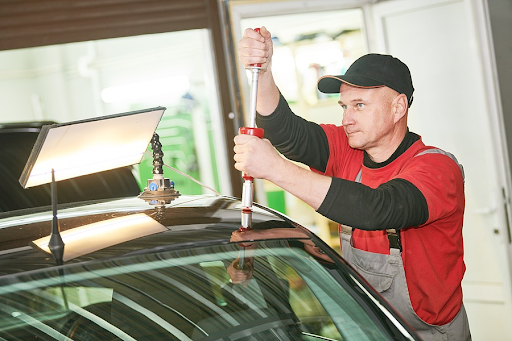 Paintless Dent Repair is an emerging technique that removes dents from automobiles in an eco-friendly way. It is a restorative process that can remove minor to even large dents from the vehicle’s body without damaging the original paint or scratching the protective clear coat layer on top.

Pressure is applied to the underside of dents by skilled, certified technicians to restore the metal back to its original or pre-damaged position without any need for filler work or repainting. It is gaining popularity due to its cost-effectiveness and speedy process, making it suitable for dents without any paint damage.

When is PDR a good Idea?

PDR is a good idea when the car has one or more dents that cause the vehicle to devalue.

PDR can be beneficial if the vehicle has dents from:

Damages done to your car can be fixed through an effective process called Paintless Dent Repair.

A certified technician will perform four essential steps in PDR to remove dents from your vehicle.

In the first stage, the technicians examine the dent to judge the seriousness of the damage. Technician also concludes the time required for dent removal.

Smaller dents may typically be repaired in less than a day by a skilled technician; however, larger dents may take longer.

After the dents initial assessment, the technician performs one of the most critical steps: How to gain access to the dent’s backside to avoid any paint damage? An expert technician will sometimes need to remove and re-install tail lights, doors, door glass, headliners or even bumpers to gain access to the dent’s backside, where they slowly apply the required pressure to push the metal back to its original shape.

In some cases, gaining access to the backside of the damage can be difficult, so technicians resort to glue pull paintless dent removal, pulling out the dent from the top surface then massaging it back down flat. The entry method varies depending on the sustained damage and location of the dent.

Our expert technicians move a step further to examine the dent with a special light. Scrutinizing the dent can enable the technician to make an evaluated judgment about the repair process, mode of entry and tools that will be needed. Through light, shadows of the dents are visible, highlighting the high focus area.

Lastly, after the dent’s detailed examination, the technician is ready to utilize PDR tools along with  PDR skills and massage the dent back to the pre-damaged state.

The majority of PDR repairs can be completed within a single day of the car entering our shop.

Although PDR is an effective process for repairing dents, it is not recommended for major accidents that have caused paint damage. In those cases, traditional Auto Body Repair methods are performed.
In any case, if you are looking for dent removal, then Ted’s Dent Works can serve you with our team of experts.

Fixing a Dent in a Lexus SUV with Paintless Dent Repair

Paying for Paintless Dent Repair With Your Car Insurance